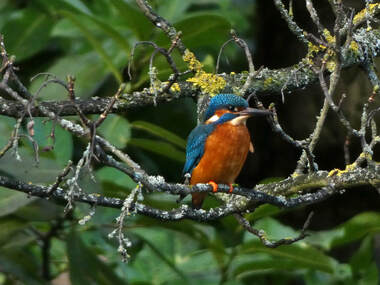 Alcedo altthis Kingfisher
We have a resident Male. Kingfishers are solitary birds due to being very territorial. We may see less of him during the breeding season as he will be sharing territory with a female unless she chooses to move in with him. The male has a solid dark beak, whereas the female has a pinkish lower part of her beak, almost like she is wearing lipstick. UK Conservation Status Amber 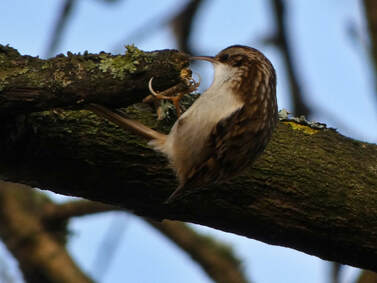 Certhia familiaris Treecreeper
Quite hard to spot as they are often high up on tree trunks. They have large claws for climbing and sharp beaks for removing insects and seeds from crevices in the treebark.
​UK Conservation Status Green 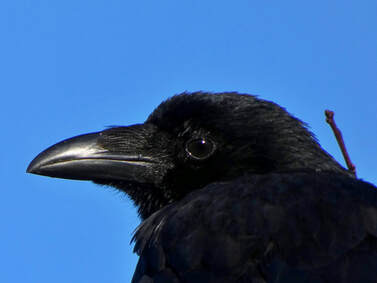 Corvus Corone Carrion Crow
One of our cleverest, most adaptable birds. Despite their considerable size they are wary of humans. Quite often solitary, although sometimes in pairs, their name belies the fact they are omnivores, with carrion being only part of their diet.
​UK Conservation Status Green 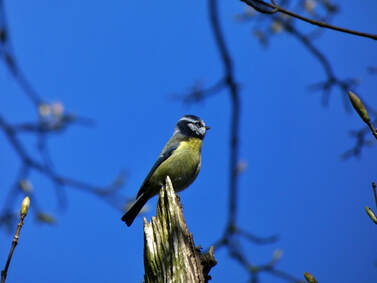 Cyanistes caeruleus Blue Tit
Weighing in at 10g the feisty flyweight of the bird world, I have seen one have a fight with a Sparrow over nesting material and win!
​UK Conservation Status Green 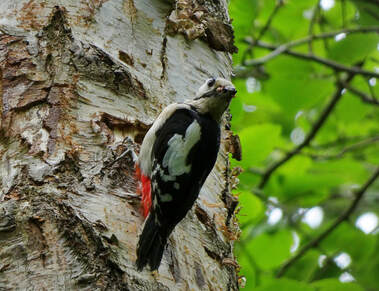 Dendrocopos major Greater Spotted Woodpecker
About the size of a Blackbird but despite being much brighter, they are ridiculously hard to spot! Very shy birds hiding in the treetops clinging on to trunks and branches hunting for insects. Easier to spot in Spring when their drumming to attract a mate makes them slightly easier to find.
UK Conservation Status Green 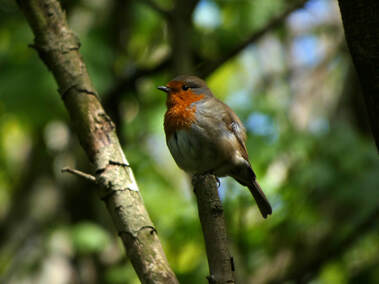 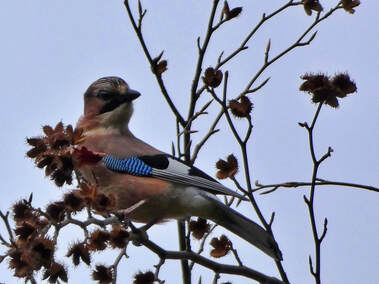 Garrulus glandaris Jay
Despite its beautiful colouring the Jay can be very hard to spot as it is very shy and rarely breaks cover. It is however very noisy and raucous with its calls and is often heard but not seen. The acorn planting skills of the Jay are stuff of legend with many a mighty Oak growing because of them. They also eat insects small birds and mammals. UK Conservation Status Green 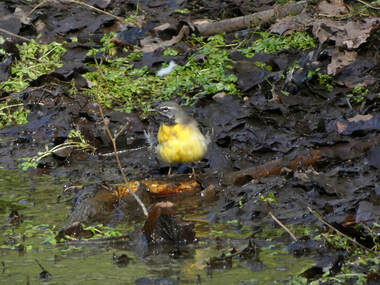 Motacilla cinerea Grey Wagtail
More colourful than it's name suggests, the Grey Wagtail also has the longest tail of the family. Although a very regular visitor to the Spa, not necessarily resident, preferring a range of habitats.
UK Conservation Status Red 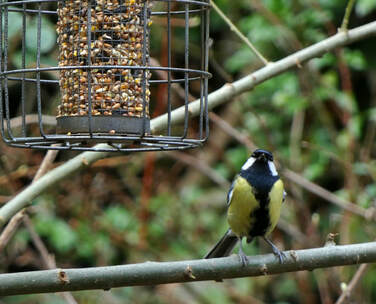 Parus major Great Tit
The largest of the UK Tits and the most aggressive, but will hang out with the others when food is scarce.
​UK Conservation Status Green 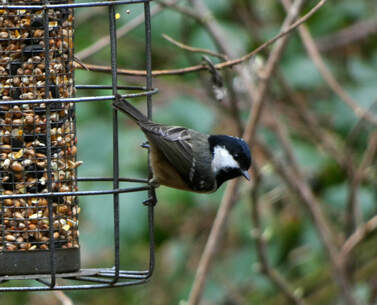 Periparus ater Coal Tit
Although not as bright as many of its relatives this is a pretty little bird with a more slender beak for feeding in conifers. Also likes to stockpile food.
UK Conservation Status Green 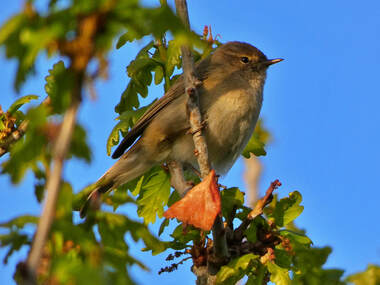 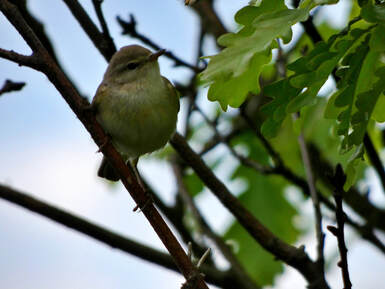 Phylloscopus trochilus Willow Warbler
Although very similar to the Chiffchaff, this pretty little bird generally has a longer stripe across the eye and legs that are more pink than brown, if you're still unsure (as I was), wait to hear its song which is way more melodic than its cousin.
UK Conservation Status Amber 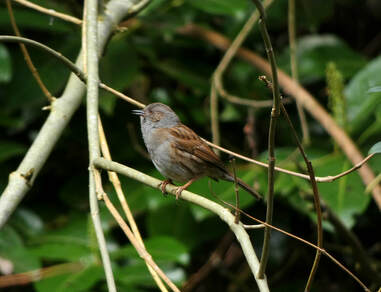 Prunella modularis Dunnock
Once more widely known as A Hedge Sparrow, the quiet and unassuming Dunnock is often a solitary character although the males get quite noisy if they find themselves sharing the same space, or female!
UK Conversation Status Amber 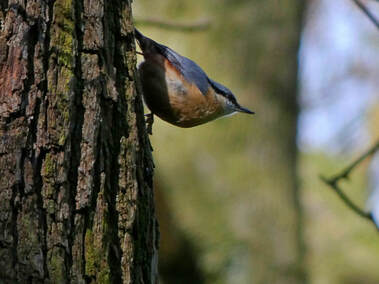 Sitta europaea Nuthatch
A plump little bird, similar in size to a Great Tit. We have seen a pair in the woods, where they will be resident as they don't tend to travel far from their beloved trees.
UK Conservation Status Green
​ 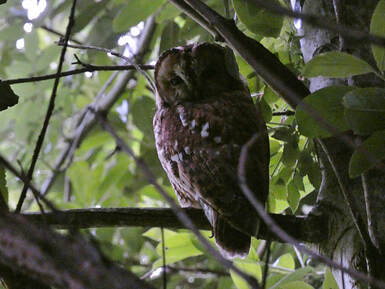 Strix Aluco Tawny Owl
The size of a wood pigeon with a rounded body and head and a ring of dark feathers around its face surrounding the dark eyes make this bird pretty unmistakable . A widespread breeding species in England, Wales and Scotland. Tawny owls are mainly residents with established pairs unlikely to leave their territories. Fledglings leave to find their own territories in autumn. UK Conservation Status Amber 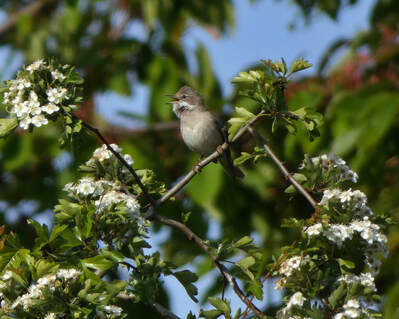 ​Sylvia communis Whitethroat
A summer visitor to our shores, around the size of a Great Tit. It has a distinctive habit of flicking its tail as it darts in and out of cover, looking for insects and berries. The Whitethroat departs from the UK around mid October to over winter in sub Saharan Africa.
​UK Conservation Status Green