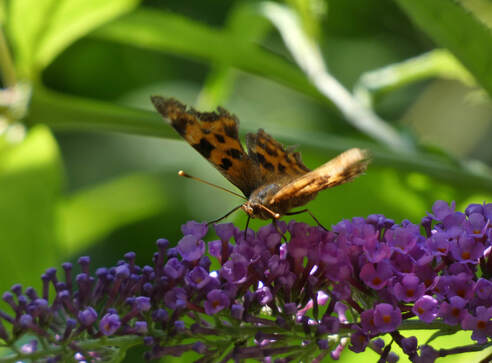 Comma Polygonia c-album
The strangely shaped wings of the Comma are for camouflage whilst hibernating in dead leaves. Their caterpillars are strangely marked too, to resemble bird droppings! They have a flexible lifecycle to maximise on good weather conditions with Nettles, Currants, Elms and Willow as caterpillar food plants. 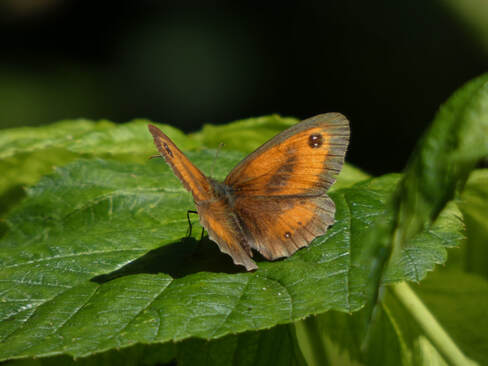 Gatekeeper Pyronia tithonus
Also known as the Hedge Brown, this butterfly gets its name from its tendency to be spotted around flowers that grow in gaps in hedges, gateways, and around the edges of fields. Favourite nectar sources include Brambles, which are plentiful at the Spa.
They are widespread in southern Britain but their range has spread north more recently. 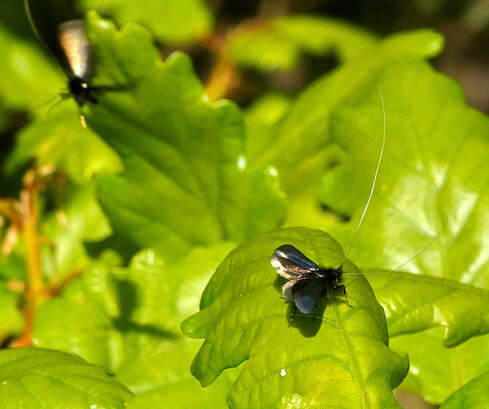 Green Longhorn Moth Adela reaumurella
These little day flying moths are active from April to June. The males have very long antennae compared to the females, but both have very hairy heads. They swarm at mating time around tree tops. The caterpillars make mines in Oak and Birch leaves before building themselves cases to live and pupate in amongst leaf remains. Spotted on Silkstone Ravine. 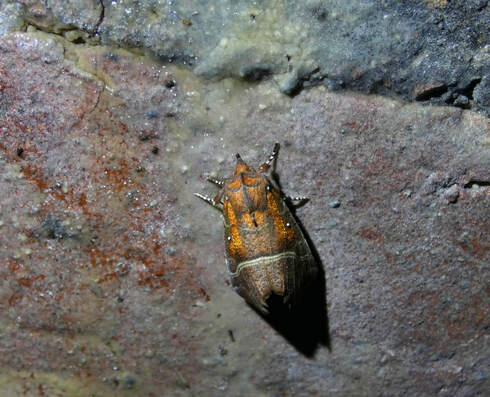 Herald Moth Scoliopteryx libatrix
This little stunner made his over winter home in the cellar at Birley Spa, as is typical for the species. They feed at night on flowers and over ripe fruit. Their bright green caterpillars eat Poplar or Willow leaves and can be spotted from May to July. 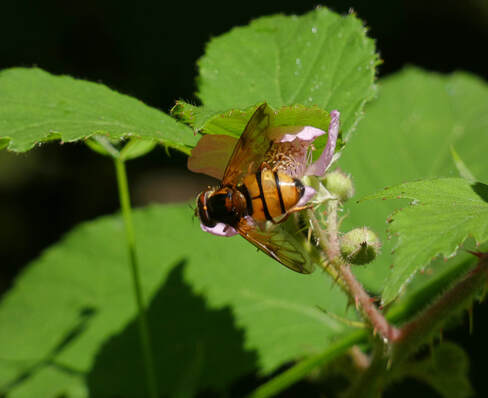 Lesser Hornet Hoverfly Volucella inanis
As the name suggests this insect protects itself by mimicking the appearance of a Hornet. It lays eggs inside wasp nests and the larvae feed on wasp grubs and detritus. Originally only seen in the South of England they are steadily spreading northwards. 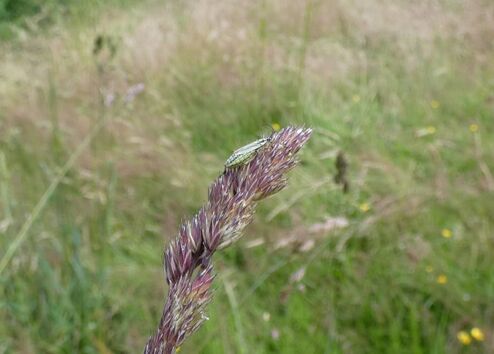 Meadow Plant Bug Leptopterna dolabrata
A common and widespread bug throughout the UK. They feed on a variety of grasses. The picture is of a female as they are usually partly winged (brachypterous) whereas the males are fully winged (macropterous) 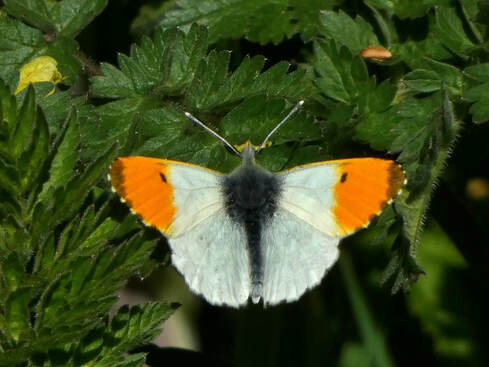 Orange Tip Butterfly Anthocharis cardamines
Preferring damp habitats and woodlands, this common butterfly chooses Cuckoo Flower, Garlic Mustard and other crucifers to lay its eggs on. A regular garden visitor although for reasons unknown they thrive much better in the wild. The female does not have the orange tip. 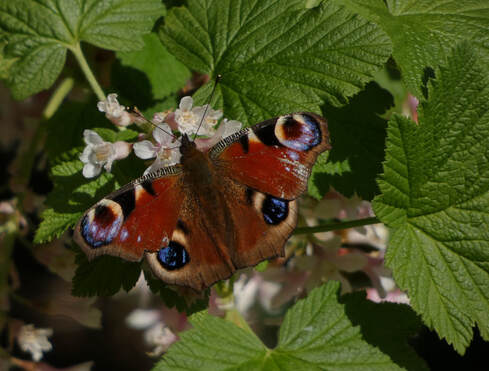 Peacock Butterfly Aglais io
One of the most recognised species, the Peacock evolved its eyes to confuse predators and the underside of its wings look like dead leaves. Although often seen in gardens on Buddleia its preferred habitat is the edge of woodlands and clearings. Nettles are the plant of choice for egglaying and their black caterpillars are easy to spot. 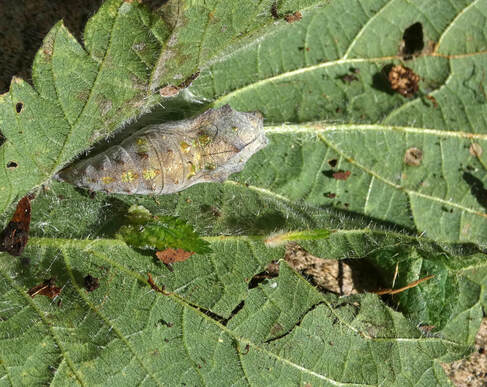 Red Admiral Vanessa atalanta
Not yet managed a photo of this beauty at the Spa, but we did find this. The pupa of the Red Admiral has a beautiful golden sheen, found on a nettle plant, the designated egg and food source for their caterpillars. Adults nectar on Buddleia, flowering Ivy and rotting fruit.
Usually immigrants from North Africa and continental Europe, more are now overwintering in southern England. 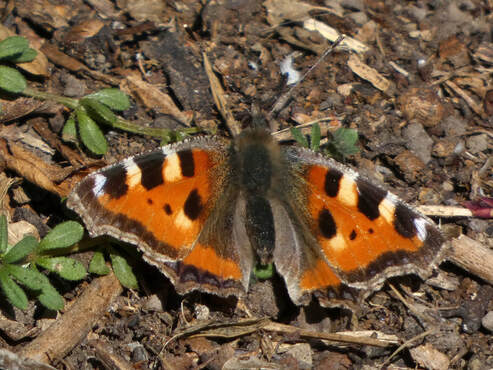 Small Tortoiseshell Aglais urticae
One of our most common butterflies, but still an absolute beauty. A regular garden visitor and visible almost all year round.
Caterpillar food plant, you've guessed it, Nettles!
​ 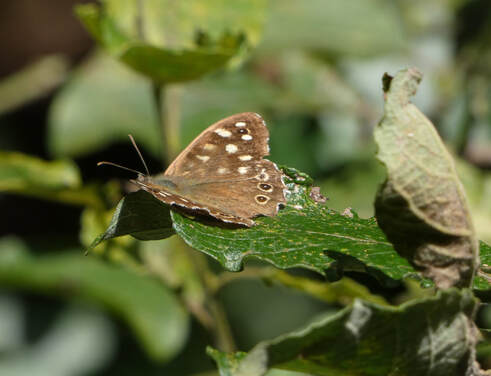 Speckled Wood Pararge aegeria
The aptly named butterfly hangs out in partially shaded woodland with dappled sunlight. The male regularly sits in sunlight. They feed on honeydew in the tree tops and are rarely seen feeding on flowers, although they may do early and late in the year when aphids are scarce. The range of this butterfly contracted during the late nineteenth and early twentieth centuries, but has spread back since the 1920s. It has continued to spread over the past two decades, recolonizing many areas in eastern and northern England and Scotland.