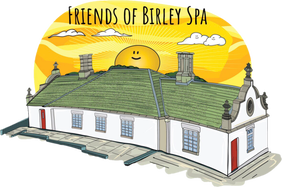 Our campaign to save Birley Spa began in the summer of 2018, following an enquiry from a former resident of Hackenthorpe who happened to visit the Spa and was dismayed to see the state of it, neglected and disused for nearly 10 years. He was informed by the council that it was about to be sold. The Friends of Birley Spa was formed shortly afterwards and the battle began.
The sale was withdrawn and we barely had time to celebrate before the council announced the building was to be put up for auction on 4th September. On 30th August at a Public meeting organised by Friends of Birley Spa, our MP Clive Betts was able to state that the auction had been postponed, possibly indefinitely. We were to have a meeting with the council to discuss our plans to secure the future of the site.
Prior to the meeting an application had been submitted to make the Spa an Asset Of Community Value, which meant the council would have to give us 6 months notice to sell the building, this was granted at the beginning of November. Within a fortnight they gave us notice they were to sell the building in 6 months.
We finally had our meeting with the council in December. During this it became apparent that the fundamental issue with the councils view of the situation as opposed to ours is that the building comes under one department and the grounds come under another. We, and everyone who knows and loves the site view it as a whole, because it is.
The spring rises in the Bath House and flows through the plunge pool into the stream, which feeds the pond, which then returns to a stream, which flows through to the Shire Brook Valley Nature Reserve. Selling the building, despite it being listed and having caveats regarding heritage and water source, is a recipe for disaster. See sheffieldoldtownhall.co.uk/ if you think we are wrong.
At the conclusion of the meeting we were invited to produce a viable business plan.
On 5th March 2019 we had a meeting with the council, where we were to showcase our business plan. We were, however, prevented from doing this as Property services intend to offer a conditional tender to selected interested parties. To hear ours would be a conflict of interest. This totally contradicted what we had been told.
We have another meeting towards the end of March where we hope to hear that this process has been halted.